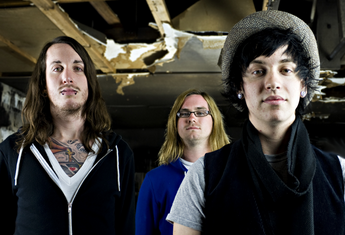 Featured: Me, The Machine

According to their MySpace (where else?), Me, The Machine sounds like “taking an acid bath with toasters”. I assume that frontman Mat Musto has a fetish for pain as this underground band is anything but painful (for people who do not see pain as an amazing feeling) to listen to. Around since only January 1st of this year, MTM is still a new band, but they’ve started to receive quite a bit of (good) attention in that short amount of time among alternative music buffs. Even then, they can only be found on MySpace.com and PureVolume. To me, this is as big a mystery as what exactly is going on in the Bermuda Triangle or why Miley Cyrus has so many fans.

Originally just meant to be the back up band for Mat’s solo career, MTM is a beautifully completed group put together from pieces of Polaroid, The Waking Life, and The Sophomore Attempt. Fans of Mat’s solo works will appreciate the revisitations of “The Actress and I” and “Birthday Party”. These slower songs have gotten some more tempo, a little more livelihood to them, and the effect makes the songs just as good listening to as their acoustic counterparts. Still unsigned, (Fueled By Ramen, where are you?!) MTM is just a notch or two below the polished, professionality of the bands you most likely overplay on our iPods. Given the chance, however, I bet they’d come through.

Of all the demos posted on the web so far, my personal favorite is “Drugs”. No, not because I’m into that kind of thing– quite the contrary. Along with the mind-sticking music, the chorus is not only sweet to my ears, but it’s something most of us can relate to: “My friends are all on drugs.” I, however, am not. So trust me on this one and check these guys out. Welcome to the birthday party.