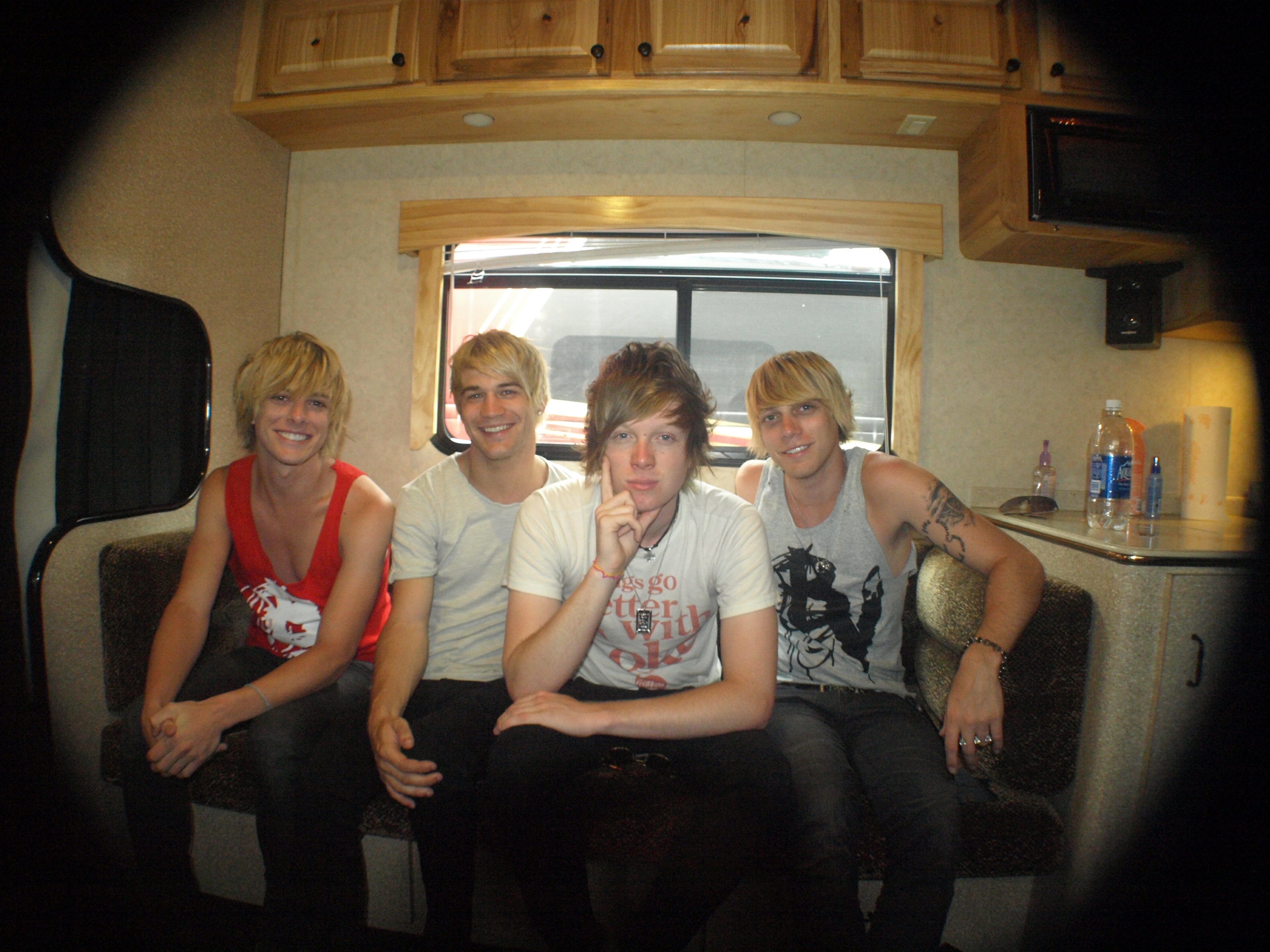 So give us your names and what you do for the band.

Rob Michelsen: My name is Rob and I play drums for Stereo Skyline.

Kevin Bard: My name is Kevin and I sing and play guitar for Stereo Skyline.

Clayton Johnson: My name is Clayton and I play guitar.

Brian Maddox: And my name is Brian and I play bass.

Which crowd has been the best for you guys on this tour?

Kevin: Mine was yesterday, Pittsburgh.

Didn’t it rain out yesterday?

Kevin: Yeah, after we played though. It was bright and sunny when we played.

Kevin: Yeah, I had the most fun yesterday.

What has been the most memorable event on The Roadshow so far?

Rob: I think. I don’t even know. I think last night?

Rob: We have become part of the Party Rock crew.

Clayton: Oh, ask them about us! Those are our boys.

Rob: They gave us all their Party Rock belts. They’re exclusive.

Clayton: I don’t know how it happened.

Clayton: Honestly, I think it’s because we both represent positive, happy, having a good time.

Kevin: In a different way, but yeah, hah.

Clayton: Different ways but, dude, yeah. Those guys are our boys now. It’s crazy how it all happened.

When did the tour start? In May?

Brian: About a month ago. End of May.

So what kind of pranks have been going on between you guys this tour?

Kevin: Well this actually isn’t our bus, we lost it in a bet. Nah, I’m kidding.

Rob: Us and Great Big Planes are known for pranking each other a lot. Just like little things. Just messing with each other.

Brian: I don’t think there’s been too many pranks on this tour.

Kevin: Yeah, but there will be tomorrow.

Rob: The next couple days will be crazy.

What is the best thing a fan has ever given to you?

Brian: I think in Chicago it was, we got this boom box that was decorated with like Stereo Skyline stuff everywhere.

Rob: I got an awesome pair of drum sticks a couple days ago that have just hearts on the whole thing that were all hand drawn and each heart is a different color.

Kevin: He’s got light up drum sticks, too.

What about the weirdest thing that was ever given to you?

Clayton: And not just like normal sized underwear, a grandpa size underwear.

Kevin: Ha, yeah, the huge ones.

What are your favorite and least favorite venues to play at?

Kevin: They’re all sweet. Worst venue is the Vibe Lounge on Long Island.

Rob: What’s that one? There’s one venue on last summer’s tour in Omaha, Nebraska. It was the hottest place in the world. It was about 115 degrees inside. It was out of control.

I hate the Starland Ballroom.

I got the flu from there last time.

Kevin: Yeah, I think that’s why we like it cause we play to way more people than we probably were supposed to.

What’s your opinion on auto-tune? Do you think it helps?

Clayton: Everyone uses it.

Kevin: Exactly. If you can find someone who doesn’t, I’ll give you a million dollars.

Clayton: I went and saw Justin Bieber and Kesha and a bunch of big artists a couple weeks ago and every single one was just using it.

Clayton: I’m not a fan of super auto-tune.

Kevin: Yeah, I should have specified with that.

What can we expect from the new album Stuck On Repeat?

Clayton: It’s been a year, more than a year, process of putting all the songs together. Like the right songs and the right people to help make the record. I think it was worth the wait. I think people are going to be pleasantly surprised. Some new material. And in my opinion, how great the songs really came out.

Kevin: It still sounds like Stereo Skyline, so no one’s going to be like surprised about it, but it’s still different.

What day does it come out?

Kevin: July 20th. You can pre-order it right now.

You guys were on Silent Library, right? How was that experience? I have a few friends that went and filmed it a few months ago and they say it was crazy.

Kevin: It was. It was pretty bad. It was fun.

Brian: It was definitely a lot of fun. The thing is, we really didn’t have to do anything like that bad. Well, I guess I should say I didn’t personally do anything that bad, so I had a lot of fun.

Who else did it with you guys?

Kevin: Me and Brian, Cassadee from Hey Monday, and Jersey. Actually, their whole band, right?

Brian: Ooh. That’s a good question. I definitely have a bunch of embarrassing stuff.

Kevin: Beside from our own music.

Clayton: I’m not really embarrassed. I have Ryan Cabrera all the way down.

Kevin: I have Ashlee Simpson. The Camp Rock Soundtrack.

Kevin: Let’s see what else. The Click 5. Demi Lovato. Hanson.

Rob: I have Cascada.

Brian: You win though.

Kevin: I have Mitchell Musso.

Kevin: Haha, yeah. That’s about it.

What is your opinion on illegal downloading?

Kevin: Here’s the thing. Everyone complains about it, but it’s two-sided. About ten years ago, when you couldn’t illegally download, less musicians made it. It was harder to get discovered. Now that the internet is around, it’s way easier to come up in the world, you know what I mean? Maybe you don’t sell as many records, but it gives the opportunity to other people to actually hear your music. Ten years ago, they wouldn’t have been found, just because you had to be lucky to have been found. It’s still the same, it just changes.

Brian: And even if they download music, it doesn’t mean they’re not going to come to a show.
Yeah, it helps out either way.

Brian: Yes! Thank you for everything.

Kevin: Thank you.
Clayton and

Rob: We love you.

Brian: Tour has been amazing and our first album comes out July 20th, it’s called Stuck On Repeat.

Clayton: Right after that, we’re doing a headlining tour. It’s going to be covering most of the east coast and Midwest. It’s us headlining with The Audition, Cash Cash, The Downtown Fiction, and Cady Groves. So check out the myspace for all the dates and details on all those shows and we look forward to seeing you all there.