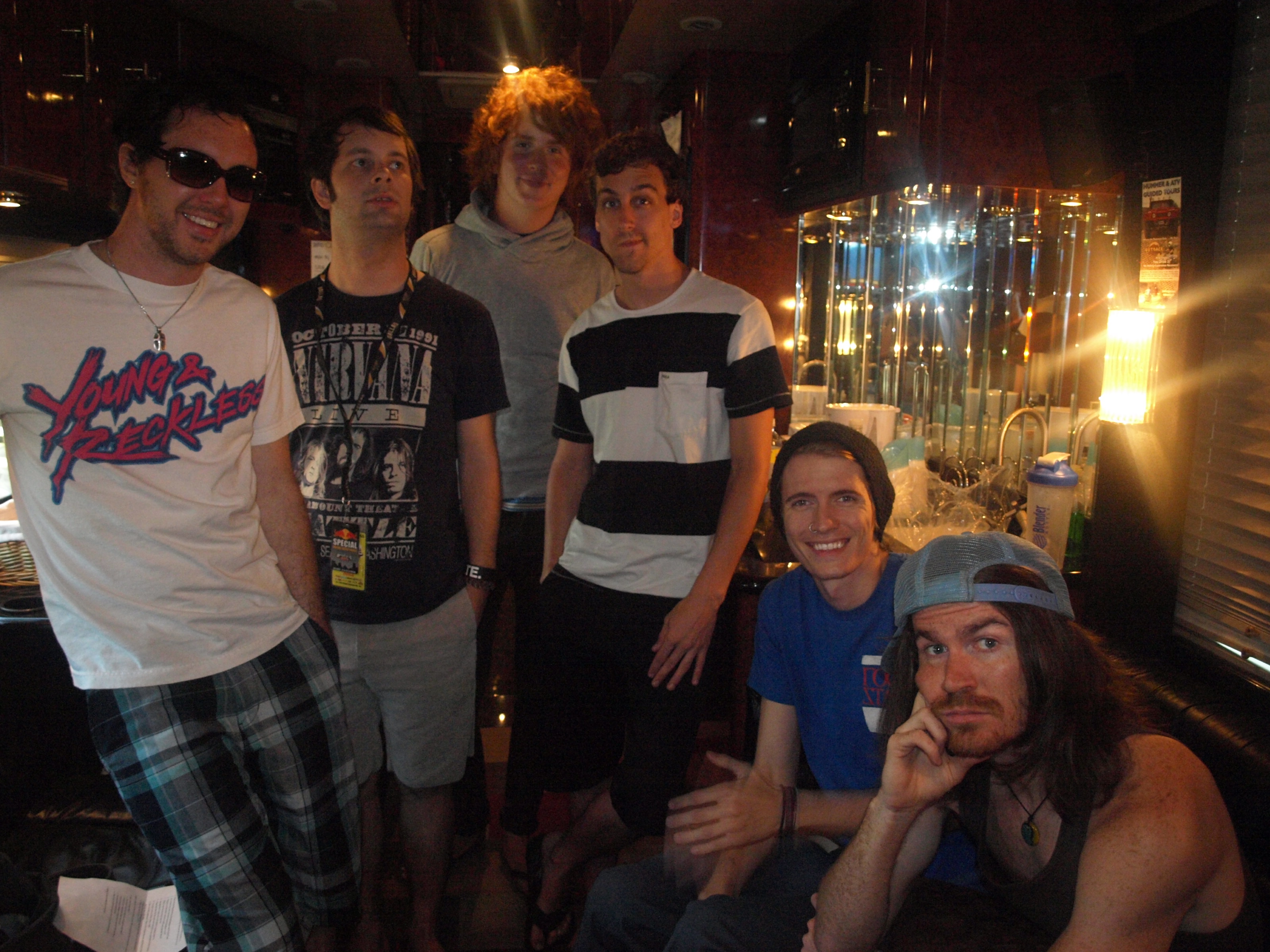 Interview with Forever The Sickest Kids

Yeah, I was actually taking pictures for you guys in the photopit.

Caleb: Did you say “fotoput”?

I only got like 2 good ones of you [Kyle] because you were blocked from the stuff on the stage.

Marc: We try to block Kyle as much as we can.

Kyle: None of us have ever been in the photopit because we don’t have passes.

Marc: My dad is head of security here.

Is the camera rolling, by the way?

Caleb: Does the red light mean it’s on?

Okay, so give us your names and what you do for the band.

Caleb Turman: I’m Caleb and I play guitar and sing in the band.

Marc Stewart: My name is Alex Trebek and I play guitar.

Marc: Do you have a good friend named Ronald?

Marc: Everyone should. You’re missing out.

After the Roadshow wraps up, what’s in store for you guys?

Marc: Actually, after this Roadshow, we’re going to a Wal-Mart tonight. Like Wal-Mart store. So I don’t know what they’re going to have in store.

Are you guys going on Kingda Ka after?

Austin: Are you going to ride with us?

Austin: You don’t want to miss Boys Like Girls, do ya?

Marc: Do you think iPig can ride with us? [iPod speakers in the shape of a pig. Kyle was very amused by it earlier in the interview]

Marc: Well he’d be strapped in.

Kyle: Jonathan! What are you doing after the inte-Jona…? [He looked over to where Marc was sitting and realized that Jonathan wasn’t there]

Marc: This is a case of Red Bull. You want one? [He then insisted that my friend and I take one, so we did]

Austin: So what do you think about our nation’s economy being in the BP oil spill?

Marc: Actually, for real though, after this, we are going on our headliner tour.

Marc: Two and a half, three weeks. It starts like one day after this ends.

Oh yeah, isn’t it with The Ready Set?

Marc: Yeah, The Ready Set, The Scene Aesthetic, Phone Calls From Home, and A Cursive Memory.

Kyle: Have fun with us.

Caleb: Please do. That would mean the world to us. So, come.

Now this happened a very long time ago, but tell me about what happened last year in Philadelphia during the Bamboozle Road Tour.

Kyle: Drama! Just so much drama I don’t even want to bring it up. Bad memories.

Austin: We played a show.

Kyle: Somebody blogged about it and it was all downhill from there.

Marc: Everything you heard was true.

Kyle: I was the first one to comment on that blog, I pride myself in that.

What is the best thing about tours like the Roadshow and Warped Tour?

Caleb: I think it’s easier on outdoor festivals to reach a larger crowd. A lot of indoor festivals are only like 2,000 people when venues like this are like 7,000. So there’s more kids. Great way to get exposure.

Do you have any crazy tour stories from the Roadshow so far?

Kyle: So many.
Kent: None that we can share though.

Austin: There was that one time that was so crazy. Remember that?

Marc: It was. It was insane.

Austin: There was that time. It was soo nuts dude.

Kyle: It was that night.

Marc: It was kinda dusk.

Kyle: Yeah, it was in the middle of the day.

Caleb: I saw a baby monkey today climb on a chain fence and then its mom just ran up and like pulled it off.

Kyle: Yanked it off, yeah.

Marc: Imma tell you a story that hasn’t happened yet, but after this interview, I am going to get a kiss from a sea lion. It’s crazy.

Kyle: They call me sea lion.

What do you like better: Festivals or small, more intimate shows?

Austin: I like the intimate festivals. They’re pretty cool.

Kyle: The ones where we can actually meet in the front lounge of the bus-
[My camera turned off, and we didn’t realize it, so we missed the rest of the answers]

What is your favorite song to play live?

Austin: I like Woah Oh, it’s fun.
Kyle and

Marc: Keeps On Bringing Me Down.

Marc: We’ve played it a couple of times. Don’t Trust A Home.

What have been the best and worst moments in your experiences from touring?

Caleb: Being away from your family and your close friends is really hard. I don’t know if that’s necessarily an experience, but it’s one of the hard aspects of touring. Best part is travelling around the world and seeing things that I would say 80 percent of the world never gets a chance to see. So you become cultured.

Marc: Definitely being able to see smiling faces. You [Sarah, my friend filming] were just smiling, then stopped when I said that. So you know, there was that awkward tension.

Austin: Awkwarddd.
[Kyle then was playing with the ice box, and broke it.]

Austin: That’s the 17th time that he’s broken it.

Best and worst venue you’ve ever played or attended a show at.

Austin: A lot of best and worst’s man.

Caleb: You remember that San Antonio show we played where the restrooms were outside?

Marc: Oh my god. El Satorino or something.

Caleb: I was eaten alive my mosquitoes. No way that place passed inspection. Like, it was scary. Spiders in the bathroom.

Kyle: And you had to go outside and around the corner –

Caleb: To go to the bathroom. That freaky door. Hole in the ground.

Kyle: This [Six Flags, New Jersey] has got to be one of the better venues though.

Marc: Where you can go and ride rides after.

You guys were on Silent Library, right? How was that experience?

Kyle: I think we were the first band to ever do it.

I was actually watching it last night, and the first one you [Caleb] did looked very bad.

Caleb: The one where I hit my boomboom?
[Camera turned off again, and they told me something ‘off the record’ about Silent Library]

Kyle: Camera’s back on!

Caleb: It was definitely a fun experience.

Marc: Kyle has this one.

Marc: Top Gun Anthem. [He then played air guitar and reenacted the whole song with Austin.]

Austin: That is embarrassing. What’s that Mandy Moore song?

Caleb: [singing] So kiss me.

Kyle: The more embarrassing song it is, the more indie you are.
[Camera died for the final time, so I had to finish from my phone, which also cut off. I had bad luck with them.]

Kyle: Thank you for being a fan and listening to our albums.

Caleb: We love you very much.