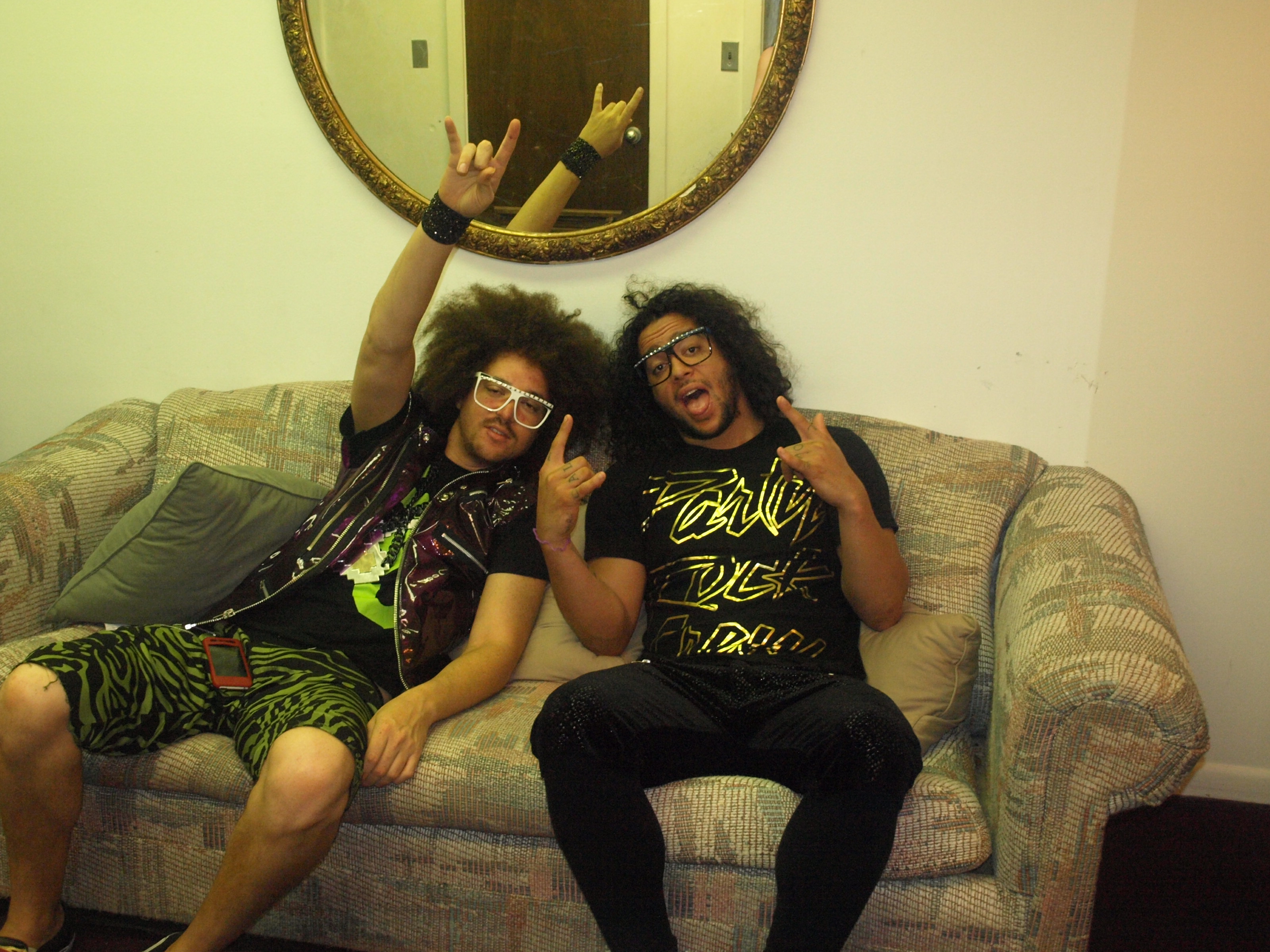 So give us your names and what you do for the band.

Stefan ‘Redfoo’ Gordy: You know, I’m like a cleaner. He’s more of a janitor, like he sweeps the floors and stuff.

On this tour so far, what has been the most memorable moment?

Sky: Yeah, you know, it was like a bonding between everybody on the tour. Rained out.

Did it rain during your set?

Sky: Yeah, it rained so we couldn’t play with the full…everything…so we did acoustic set, which was really fun.

Have there been any pranks going on during this tour?

Redfoo: Not from us.

Sky: Between bands. Last night I stole – we have two busses and our drummer busses, so I stole every other one of his sneakers. You see how I wear two different shoes? (He then showed us that he was wearing one blue, one red shoe.) I purposely buy the same type of shoe but I left him with a boot and a Van to wear today. So, look for that.

Redfoo: I don’t know the name of the worst venue, but it’s always this type of venue with a metal ceiling and it changes the key of the damn song.

Sky: I’ll tell you what the worst venue is. It’s called Manor in Chicago. That’s all I can say.

Redfoo: Well. That is probably the worst venue, hah. See, I like a venue that has nice sound. Invest in your sound equipment.

Sky: One of the best.

What was the first job you guys ever had?

Redfoo: First job that I had was probably when I was sixteen, before I did it for the first time, I got a job.

If you were not a musician what other career would you want to have?

Sky: Yeah, a cleaner of some sort.

Have you met anyone that you were completely star struck by?

Redfoo: Well. You know what? I remember when we were just starting this thing out. Oh, well this was before we started. But, we saw Chuck Liddell. He was on top of UFC. And I remember we saw him walking down the street after he lost this one fight.

Redfoo: We saw him walking down the street and we were like “Chuckkkk! Chuck!” We weren’t star struck by him so much, but we were afraid to be struck by him. He was a star.

What do you do to pass the time on tour?

Redfoo: We made a song on the bus called ‘Already’ for our next album that we are very excited about. And we’re making songs, making songs.

What is your favorite song of all time?

Sky: Man. I’d have to say ‘Off The Wall’ by Michael Jackson.

Redfoo: Probably ‘Power’ by the Temptations. (If you don’t know the song, look it up. He started singing it to us.)

Sky: I’m not embarrassed by my music selection. There might be a few songs on my iTunes catalogue that I’m not too proud of. I respect the music. I respect their hustle.

Redfoo: Remember when we were driving and it was a little minivan and people saw us in the car and started screaming ‘Ahhhhh’? And we were like ‘What? They know we’re here?’ This is when we first started. And we were like ‘Wow. This is…’ And then, someone said in the car, ‘Oh look, The Jonas Brothers are here.’ And the people, they thought we were The Jonas Brothers with the tinted windows. That was in New York.

Oh, so Stereo Skyline told us you gave them all their Party Rock stuff.

Redfoo: We love our fans.