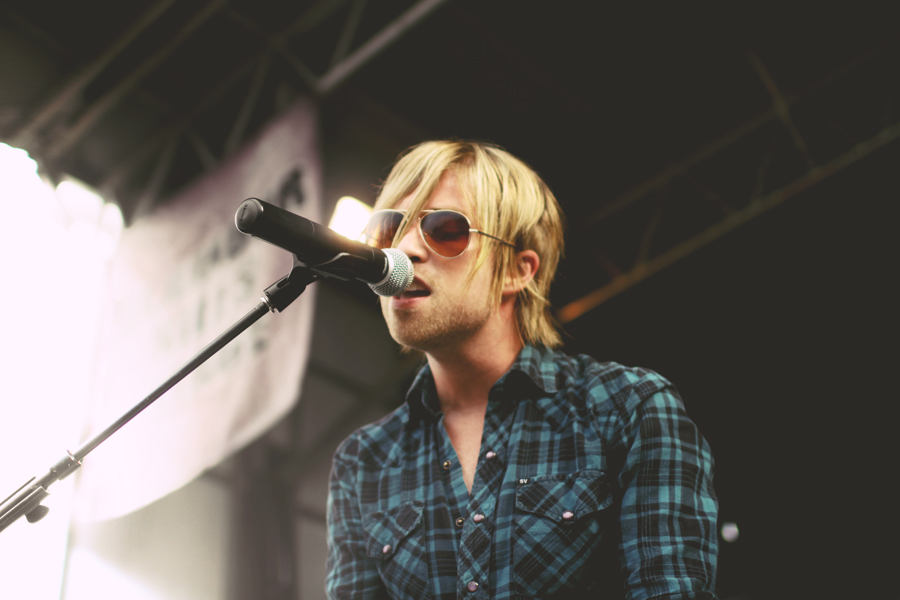 Interview with The Rocket Summer

How has Warped Tour been for you guys so far?

It’s been good. It’s been hot. It’s been what we expected. Ups and downs and arounds.

I probably like more personal club shows. But they’re all there for a reason. Festivals are good because you’re playing for a lot of people that maybe wouldn’t come to see you if you were by yourself. It’s a good way to play for a lot of new people.

How do you pass the time while out on tour?

On Warped, it’s really busy. Warped is not like other tours where there’s time to hang out and stuff. But, you know, I write a lot. It’s pretty much all I do whenever I have any off time. I want to make a record sooner or later, so.

Have you written most of the stuff for the new album?

Like half of it. I’ve got like six songs, or seven. I’m really excited about it. It’s so far away though. I mean, this album has only been out for four and a half months, it’s kinda weird that I’m already that far ahead.

Are any of them recorded, or are they all just written so far?

Nah. Nothing is done yet.

We just did a tour with the Goo Goo Dolls for like six weeks, and that was some of the nicest venues you can play. And then we’ve played some really bad places. We played a boat – a little ship in Paris, France a few weeks ago. It wasn’t the worst venue, but it was definitely interesting. Swaying back and forth and it was like the size of this room (It was basically a 10 by 10 room with 20 people in it doing interviews). We were like, “I can’t believe we got booked here,” but it’s a gig, and it’s a story.

What is the most embarrassing song that you have on your iPod?

I have a lot of songs on my iPod. But you know how sometimes if you hit play, it plays the first song in the alphabet of the first band? Well for mine, it starts playing ‘NSYNC. And it’s Dirty Pop. So if I ever accidentally hit play, it’s “dirty pop,” (He started singing the song, haha) and it’s just like “Uhhh. Stop.”

What are the best and weirdest gifts you have ever gotten from a fan?

I’ve gotten a lot of handmade stuff, which is always really nice. It all means a lot to me. I could probably fill an entire room with gifts. The worst, I guess it just depends on the type of person you are. It’s like “I don’t want your underwear.” Some dudes might, but, no.

What is the strangest thing a fan has done to get your attention?

This interview is going to go weird in a second from the last thing we were talking about. I don’t want to repeat it, but you can use your imagination. Yelling things at me that are, uh, shocking. We played this one show in 2005 with HelloGoodbye and it was booked at a church, and I think it was because we were on it, because I’m a very spiritual person, so we have a lot of Christian fans. It’s very much a huge part of my life. But because we were on the tour, they booked it at this place. Lots of swearing from the stage and craziness. This girl yelled something at me in the quietest moment of the song that was just so shocking. Like I was in a church, and she was on this dude’s shoulders. It was “I wanna something you.” It got my attention – it got everyone’s attention. I was sitting there, playing in front of a cross, stained glass windows, and I was like, “Never thought I would hear that here.”

Oh. And that doesn’t happen all the time! I’m sitting here talking like I’m Tom Jones or something. “Uh, yeah, people give me their underwear.” This interview is weird. Okay.

Yeah. Once in a while. I try – I don – I don’t even know what I’m saying anymore. Okay.
What I want to say to my fans is thank you guys for supporting what I do.  I want to do this for a long time. I don’t know what else I would do. So, thank you. It’s kind of like up to you guys if I’m gonna keep doing that, because I want to keep doing it. So keep coming to shows and supporting. I love you very much.