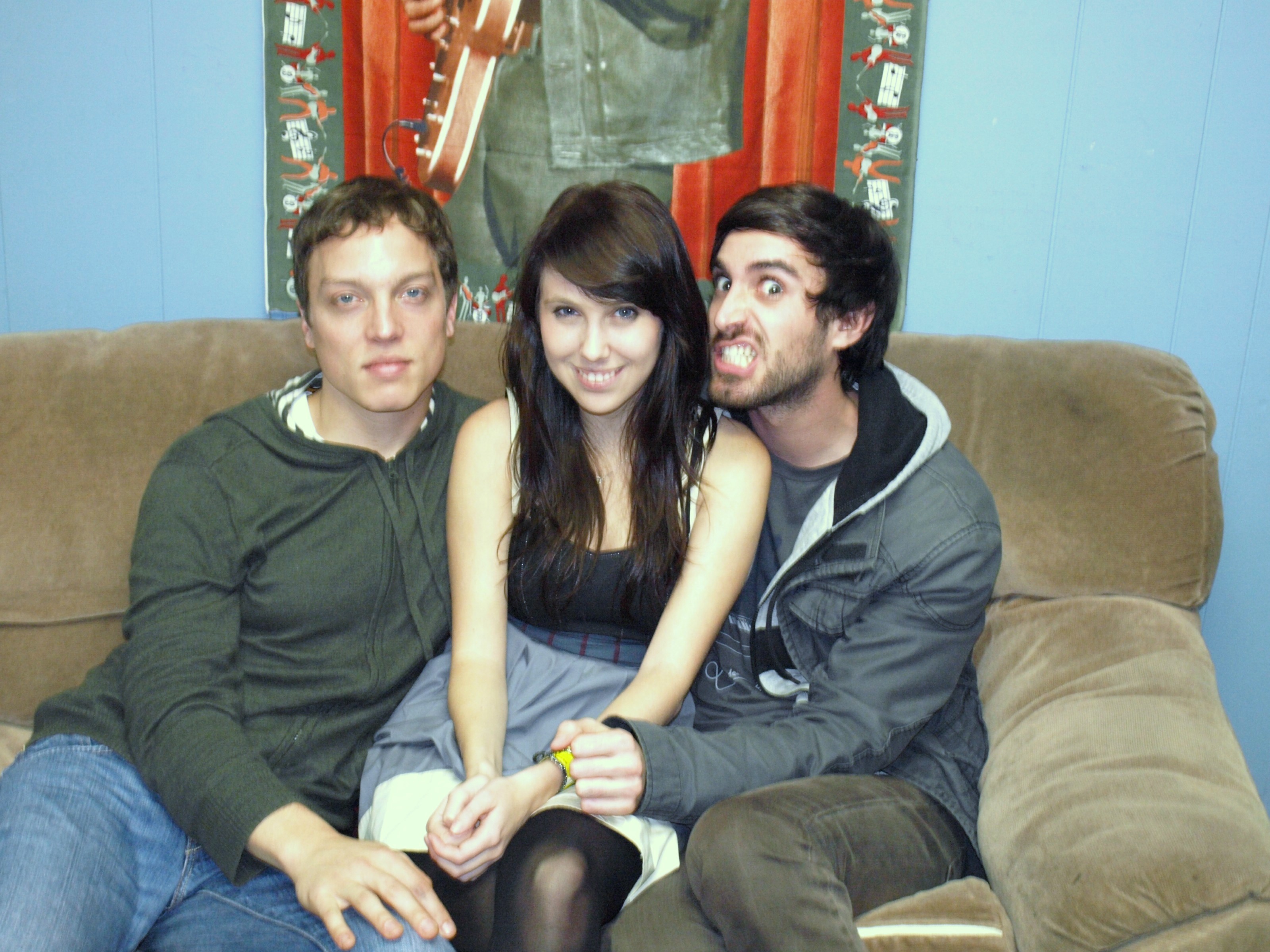 Interview with The Narrative

Give us your names and what you do for the band.

Charlie: Okay. I’m Charles and I play the drums.

Suzie Zeldin: I’m Suzie and I play keys and sing.

Jesse Gabriel: I’m Jesse and I play guitar and sing.

So how did you guys come up with name?

Suzie: The Narrative. Well, it was on a really long list of other names. We just decided if we all came up with like 20 names each that we’d eventually find one that we liked. We sent around some lists. Sent them around to our friends and we picked a couple that we liked, but some of them were taken. Like the Myspaces weren’t available. That was really important. And then we settled on a name we weren’t stoked about and after some time, we went back and revisited the list and one of the names on it was “The Narrative Paradigm.” We went through like a literary terms and a lot of poetry to try and find something that we liked. We ended up chopping off “paradigm,” just leaving it at “The Narrative.”

Who writes all the lyrics and music?

Jesse: Lyrically, Suzie and I both write. Musically, usually the skeleton or bare bones of a song are written by Suzie or myself, then it’s kind of fleshed out amongst the group in equal parts, I’d say.

Is there anything planned for after this tour?

Charlie: Maybe get writing some stuff. We’ve been playing around with some new ideas, but we haven’t had a lot of time to really dedicate to it. We want to keep touring like crazy next year. This tour ends December 5th, then we get home on the 7th, then we have a show on December 8th in Jersey with Dashboard Confessional at the Stone Pony.

Best venue in New Jersey. My dad used to play there.

Jesse: Is your dad Bruce Springsteen?

Charlie: Is your dad Dashboard Confessional?

Charlie: Where’s he from?
Baltimore.

Charlie: Shoot. Somebody mistakenly said in an interview that we were from Baltimore.

Suzie: They actually wrote that in Alternative Press.

Jesse: Actually, what happened with that was that that wasn’t even a spoken interview where somebody had to remember something; it was that I wrote everything out, and still…that happened.

Suzie, this is probably the most common question that you’ve ever had. You probably know it already.

Suzie: What’s it like being in a band with guys?

Suzie: It’s annoying. [Charlie then lays down in her lap.]. No, actually, it’s fine. I don’t think that it’s particularly weird in any way. People seem to ask that question because they think that it’s really hard or something, but you know, it’s kind of like having brothers that you hang out with all the time.

Jesse: You’d be worse off with a bunch of chicks, because then you’d be all cat fighting. Clawing at each other all the time.

Suzie: I’m not like a super girly-girl necessarily, where I’m really high maintenance or anything. These guys might say otherwise [Charlie goes wide-eyed and starts shaking his head yes], but I’m sure there are a lot of girls that are more difficult to deal with than I am on that front. I dunno. It’s not that hard. We just hang out. We’re like family. It would be like asking somebody what’s it like to have two brothers. Well. They annoy the crap out of me, but I love them anyway.

Jesse: What are you saying? That was a mean thing to say.

Charlie: You know what? Ask us what it’s like being in a band with this one…Don’t ask us. It’s okay.

What are your best and worst experiences from touring?

Charlie: Worst I would say, I got Lyme disease on tour and that kind of sucked.

Suzie: That was the worst for everyone I’d say. Sorry Charlie.

Jesse: It didn’t affect me at all. I was fine.

Suzie: There have been a lot of weird things.

Charlie: I mean, sometimes we sleep in a van in a Wal-Mart parking lot and that gets kinda weird. Yeah. That gets weird.

Jesse: What about best experience? You guys are focusing on all the bad things.

Charlie: That’s what she asked us. Worst and weirdest.

Best and worst or weirdest.

Suzie: The best is like playing in front of an awesome crowd at an awesome venue where everything sounds great and you feel great.

Charlie: When you can have fun and not worry, just play music.

Have you ever played here before?

Suzie: We’ve never played here, but we’ve been to the Gramercy Theatre a couple times in New York City. Some of our best shows we’ve played there were with Relient K.

The sound here is actually really good. But when I was here over the summer, the sound for the keyboard went out during Cash Cash and it messed up the whole show.

Charlie: If the keyboards go out during our show, it’s actually not a big deal.

Jesse: We basically turn the keyboard way below-

Suzie: That’s not even true at all.

Charlie: We’ve actually played some shows with it off, but she has it in her monitor, so she thinks there’s sound.

Jesse: We don’t turn her mic on either.

Suzie: We played this one set where the keyboard did cut out, actually. It was in Michigan. One of our first shows out there and that pretty much sucked.

Jesse: All our shows are terrible, so we just deal with it and we’re like, “let’s just have a good time and have fun and do interviews.” We’re good at that.

Charlie: I wish that being in a band was just doing interviews.

Jesse: If we could just play interviews all day. My favorite.

If you could tour with any band or artist, dead or alive, who would it be?

Charlie: Dead? That’s a little bit twisted, the question. MC Escher. If we could tour with MC Escher, things would get weird real quick.

Jesse: Playing all our instruments upside down. Staircases that never end, all meshed together in intricate ways.

Suzie: I would want to tour with any of my favorite bands because I think that would always be a dream come true for me. So, touring with anyone like Death Cab [For Cutie], Jimmy Eat World, Brand New, and many others, would be fun to say that you got to do that.

Jesse: I would tour with Sublime! I never got to see them live and I would love to tour with them.

Charlie: I would tour with Phish. I always say Phish because I think that would be awesome. They’re still alive.
[Jesse and Suzie made fish noises and faces after that part]

Charlie: We would not fit in with that crowd.

Suzie: We can jam.

Jesse: We can totally jam.

Charlie: I think it would take us like to weeks to figure out how to end every song and then just go into jam for 30 minutes. We’d need a bassist, though.

Jesse: I like to play Empty Space a lot, too.

Suzie: I’ve been liking that lately, too.

Suzie: We like playing all our songs pretty much.

Do you like festivals or small club shows better?

Jesse: Both. I like small club shows when they’re packed out. That’s a lot of fun I think because it’s this grungy kind of vibe. You know, we’re not this crazy rock band, but it’s about as close to that as we can get I think to feeling like that.

Any guilty pleasure music while on tour?

Suzie: We listen to everything when we’re on the road. We listen to all the other bands that we’re playing with. We’ll throw their records on.

Jesse: That’s not a guilty pleasure, though.

Jesse: You’re not answering the question. You’re [Suzie] doing a poor job at this.

Suzie: We listen to some Taylor Swift.

Charlie: Some stuff from when I was younger.

Suzie: We feel pretty good about everything we listen to.

What about the most embarrassing song on your iPods?

Suzie: I currently have nothing on my iPod because I just rebooted my phone.

Jesse: I have the whole “2ge+her” discography. Remember 2ge+her, that MTV show? I’m not really embarrassed about it, but anyone else would be. I’m kinda proud of that.

Charlie: Everything on my iPod is so good.

Jesse: That’s not true. Want me to look and name some for you? I could say a few.

Charlie: Awesome. Awesome.  What else?

Jesse: Give it to me, I could find something.

Charlie: This is always the hardest question. Go head, Suz. Say something good to our fans.

Jesse: Stay off the drugs.

Suzie: Prescription drugs. Too much Nyquil is bad for you, too.

Suzie: Listen to your parents.

Jesse: Have protected sex if you’re gonna have sex. Wrap it up.

Suzie: Make sure you always used a condom.

Charlie: Don’t be vegan, but don’t eat too much red meat. Vegan doesn’t make a lot of sense, but red meat is bad for you if you eat it a lot. Don’t eat bacon twice a day.

Suzie: I only have it once a day.

Jesse: Love your parents…as long as they have loved you.

Charlie: And even if they didn’t…

Suzie: Maybe they were having a bad day.

Charlie: And it was your fault. So, is that good?

Suzie: Thank you very much.