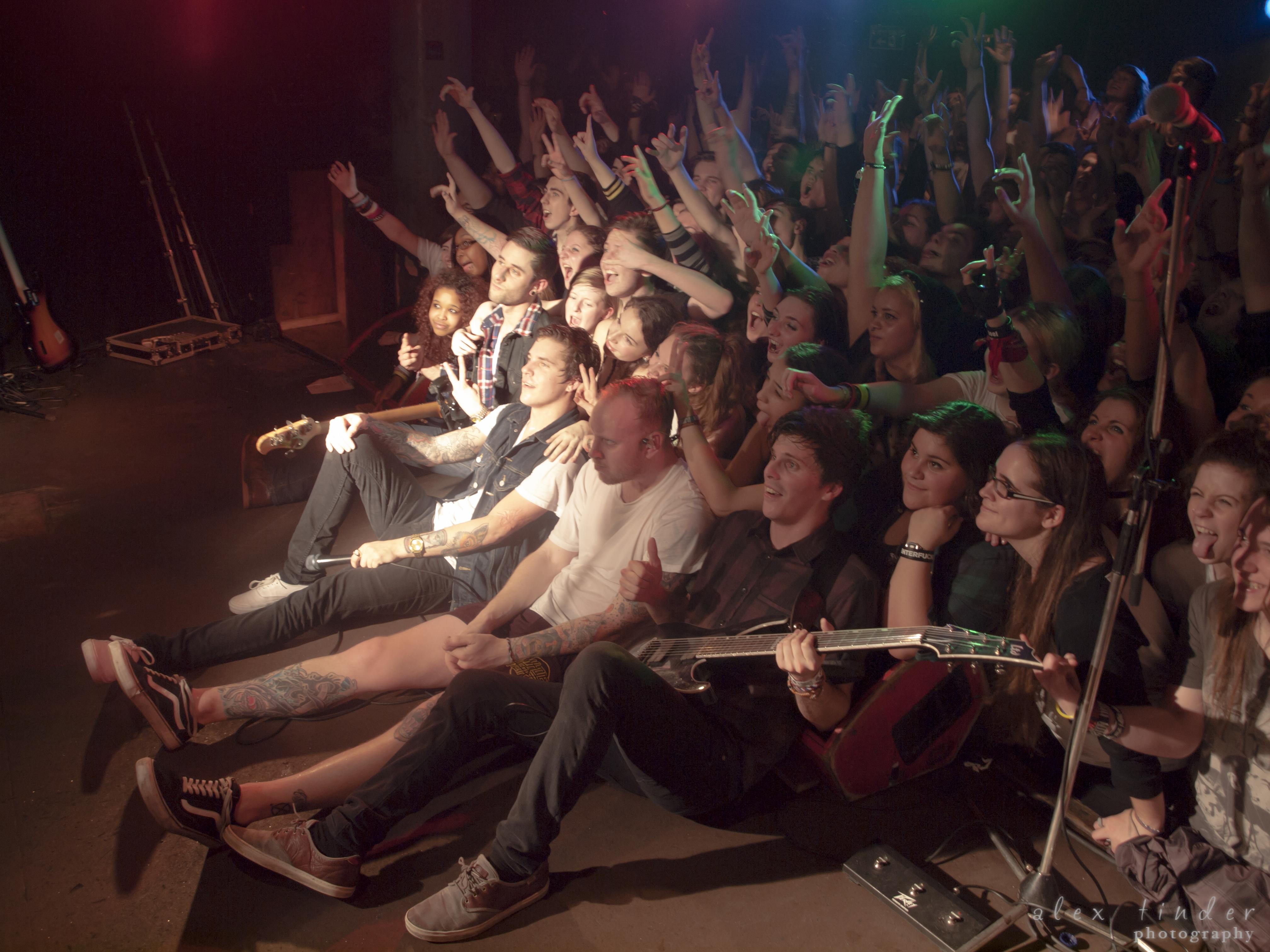 On Thursday, I made a trip up to The Underworld in Camden Town, London to see Our Last Night’s first headliner in the city. Upon first impression, the venue was a very interesting one. It was my first club-type venue I’ve been to since I arrived in London, and it was definitely an amazing experience. It is quite literally an underground venue, being the basement of The World’s End Pub. The only bad thing I could say about the venue was the lighting (Then again, I’ve never been to a venue where the lighting was perfect at all times, so not much to complain about there). It was split-level, so you could get a pretty good view from practically anywhere in the venue and the acoustics were pretty consistent throughout. There was no photo pit that night, but that only added to the atmosphere of the show, bringing the fans just that much closer to their idols.

I unfortunately missed the first band, High Hopes, because I was interviewing Our Last Night, but the screaming from the crowd heard from backstage tells me they put on a good performance.

The second band, Empires Fade, definitely had a good connection with the crowd. Although not everyone knew the lyrics, the guys got a large amount of the crowd dancing and head banging throughout. The singer, Jack, kept throwing in jokes about Manchester during their set, “I’m from London, but these guys are from scummy Manchester.” At one point, Jack told the crowd that he wanted to see crowd surfing throughout the set, so he pulled a fan from the front row onto the stage and had him stage dive and crowd surf all the way to the back. This didn’t entirely inspire more people to do the same, but it was fun to watch nonetheless.

I unfortunately also missed the majority of Secret’s set because I was a bit preoccupied with some technical difficulties with my camera, but the songs I heard got everyone in the crowd excited and immersed in the music. Another one of the American bands on the tour, they were very grateful to those who came out to the show. While I did miss a large chunk of their set, I would definitely be interested in seeing them again.

I don’t know why, but it has always been interesting to me to see bands setting up their own gear. I guess I’m used to seeing tech guys doing it, so when I heard screaming and saw Tim, Matt, and Woody from OLN setting up their instruments, I was a little surprised for a few seconds until I realised that it quite literally happens all the time.

From the first song (Same Old War) to the very last (Liberate Me), they had fans hooked onto every line they sang and every note they played. The guys were extremely grateful to everyone that came out to the show being that it was during the Tube strike that was going on until 9pm that night. While I did hear some stories of people not being to make it out, there were people constantly arriving throughout, and by the time OLN went on at 9:45, the venue seemed pretty packed. This was the first show in a couple of years that Matt and Trevor’s dad was able to see, which understandably added more of a personal connection for the guys, so it was great to be part of that experience.

To be honest, when they played Skyfall and said it was a cover, I never would have guessed it was Adele. They do such a great job at recording and performing these songs that I would definitely suggest anything that they cover.

At one point towards the end of the show, I looked over and saw Woody walk over to a girl in the crowd and wipe the tears from her cheeks (at least this is the story I am sticking with, as I was standing on the opposite end of the stage and my eyesight is deplorable..). She had the biggest smile on her face for the rest of the show, which was an amazing thing to see. They are definitely a great group of guys that care so much for their fans, which is something that has become increasingly rare.

Over 24 hours later and my ears are quite literally still ringing and Sunrise is still stuck in my head, so if that tells you anything about the show, it was definitely an amazing one to be a part of.

Be sure to check out the interview I did with Our Last Night! (being posted tomorrow along with the photos, so check back for that)

To catch the last leg of the European Tour, check out the remaining dates below! Tickets can be found here.