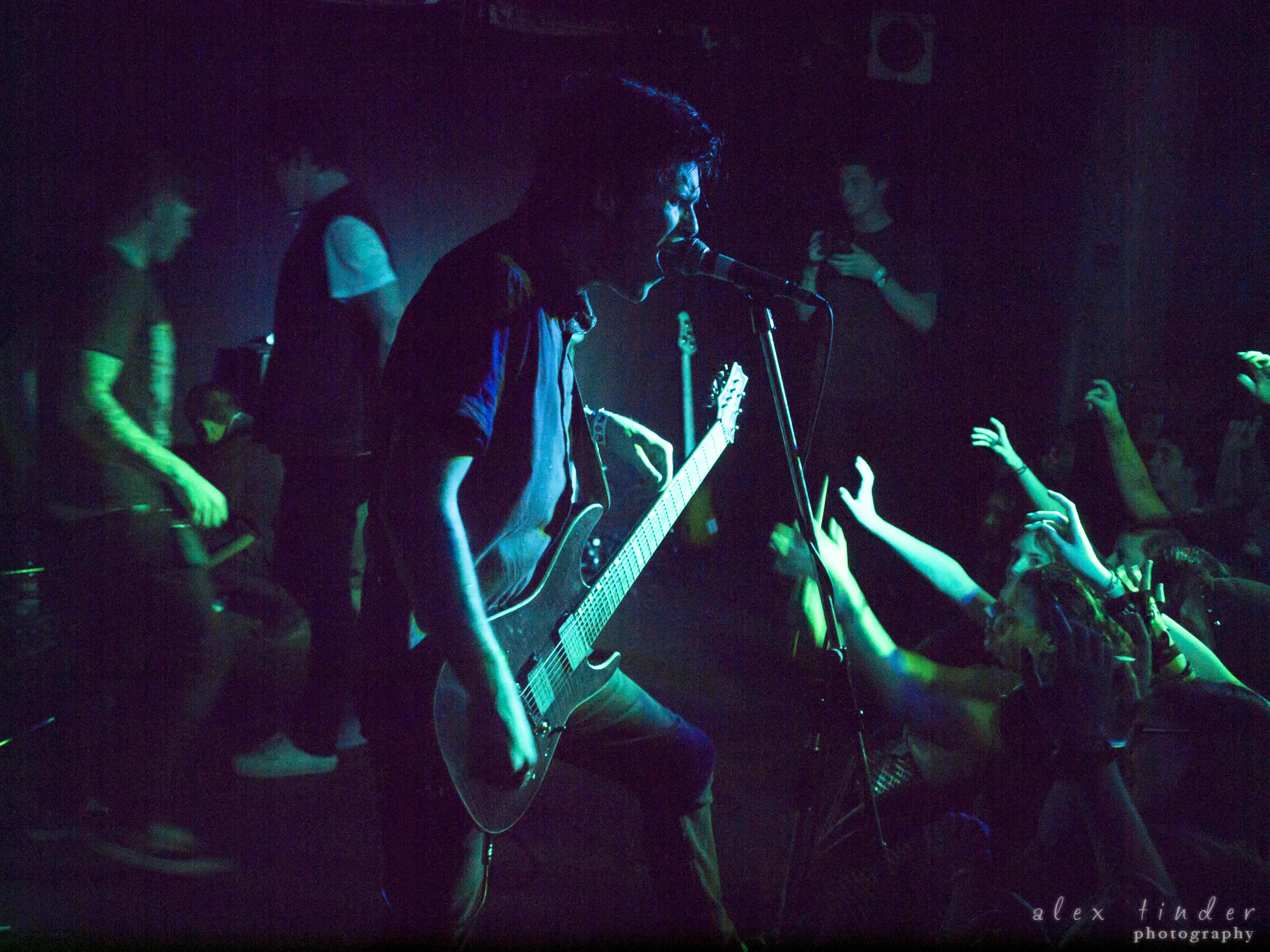 Interview with Our Last Night

On Thursday, I sat down with the guys in Our Last Night at the Underworld in Camden, London for their first headlining show in the city. We talked about everything from their shows in Russia all the way to Ryan Gosling references. Being that I had to pack for 5 months in London, I was bound to forget some things. The #1 thing I forgot to bring was the USB cord for my video camera. I will definitely be posting the video at a later date when I get a new cord.

How would you describe your music to someone who hasn’t heard it before?

Tim: Those are the three main ones.

Matt: I think you guys covered it, before awesome. We are awesome.

Trevor: Yeah, nothing wrong with awesome.

What do you think is the biggest difference between playing a show in the States and playing shows abroad?

Trevor: Pretty much everything

Matt: I think we don’t play here as much, so people are just way more excited. It’s like, for example, New Jersey, we play New Jersey like, I don’t know like…

Trevor: So we’ll post a show, and they’ll be like “Oh, well I could go, or they’ll just come here in like another month and a half and I’ll wait.”

Whereas here, if you miss it…

Matt: Then you don’t know when we’ll be here.

Trevor: It could be a year, it could be two years.

What are some goals you have for this year, either as a band or personally?

Trevor: Just keep touring as much and putting out as much music as we can. Covers and original stuff.  And just keep trying to build our audience to a new level it’s never been before.

What is the most memorable moment so far as a band?

Trevor: Probably this headlining tour and Russia, which was crazy. They were like the biggest headlining shows we’ve ever done.

Tim: It’s been surreal, to be honest.

Trevor: This whole tour, there has not been one bad show. We’ll headline sometimes in the US and we’ll walk out on stage, and it’s cool there’ll be some kids there, but it’s nothing like this here, where you’ll walk out and you know it’s just going to be like a crazy show.

Matt: And it’s different when the kids are there for you. We’ve played big shows, but we’re supporting on it, but this is the first time we’ve played pretty big shows…

Trevor: Probably like a band like Linkin Park headlining, and then…Well it just wouldn’t make sense. My dream tour would make no sense. It’d be like One Republic, Linkin Park, Katy Perry.

Trevor: Yeah, something like that would be pretty sick.

Woody: I’m right there, for sure. I mean, touring with like…

Trevor: A realistic tour, though.

Woody: Yeah, trying to be realistic, then, that for sure 100%, and that’s not even that realistic.

Matt: It’d be awesome to do A Day To Remember tour as one of their supporting bands.

Do you prefer large festivals or small, more intimate shows?

Tim: I like playing festivals, but they always seem to be way more stressful.

Trevor: Yeah, they’re really stressful. There’s just so many bands on a festival and you just never have that much time to set your stuff up, or you’re using other people’s equipment and you’re all like backlined.

Woody: It’s tough to get into a rhythm on a festival, too, because on tour, you play every day, and there’s a lot of inconsistencies, but you play at the same general time, so you’ve got to get your routine.

Matt: I like playing inside, also. I don’t love playing outside. Cause you’ve got like the lights and it’s louder because it’s all echoing off the walls and stuff. I don’t know, it’s just more energy inside.

And with this kind of thing, people aren’t just going to wander off to another stage.

Matt: Too much ADD.

How would you say you have evolved as musicians and as a band since you started?

Trevor: I mean like, what we listen to ourselves definitely has changed, which has changed the writing process.

Matt: I think I’ve gotten more interested in songwriting, instead of like writing like crazy guitar riffs and stuff, which is still fun, but I think I’ve gotten more interested in writing the song and making the song good first, and the very bare bones of the song, and then kind of making crazy after you have the song. So putting in all the crazy drum parts and guitar parts together and then throwing vocals over it and hoping it like sounds good. For me, that’s it. Maybe some fans like the crazy, how we used to write, but for me, I like that better.

Do you have any pre-show rituals, either individually or together?

Woody: Matt likes to chill. That is Matt’s pre-show ritual

Matt: Some people like to get in the zone and stuff, but I don’t know, I feel like that would just…I feel like I wouldn’t like that, really. It would make me more nervous. I’d rather kind of just be chillin’, and then like “Alright, we’re playing.”

Trevor: That’s kind of what we all do. We’ll change into our show clothes and that’ll kind of get me ready.

Matt: I do enjoy being inside the venue for most of the show, actually. Sometimes you’ll have to be doing other things or you’ll go out and explore, at least for like the couple bands before you play. It makes it actually feel like a show. There’s been a couple times where we get back to the venue and we have to play in like 5 minutes. And you just feel like you’re not in the zone. That kind of will put me out of the zone. As long as I’m in the show, hanging out, maybe talk to some fans, go to the merch table, was involved in the show is one of the biggest things.

(At this point in the interview someone opened the door to the backstage, and eventually Trevor and Matt’s dad walked in)

What would you say are the biggest messages in your music?

Matt: All over the place. It kind of changes from album to album, I’d say. The newest EP is pretty positive, positive messages all around. That and kind of how we saw though a lot of struggles of being a band, and stuff like that. Just having a lot of changes in life.

What is the strangest thing a fan has done to get your attention?

Matt: Hm, okay. One girl made me do a phone message to her friend, a video message, because she couldn’t make it, then she’s just like, “I’m just kidding, that was just for me because I wanted to videotape you talking.” And I was just like…okay. It was funny. But I don’t know, has anyone done anything super creepy?

Mr. Wentworth: Come on Trevor, speak up, you’ve got lots of stories

The last few are some fan questions. What sparked the softer sound found in your most recent work as compared to your earlier work?

Matt: It is definitely, from the old, like screaming stuff. A lot of people think that just because we don’t have screaming that it’s softer. I don’t know, a song like Dark Storms or something is heaver than a lot of songs that we’ve had in the past. But Sunrise obviously is pretty soft. We just like listen to less heavy music now I think, so based on like what all of us listen to.

Tim: And the term heavy has just definitely changed.

Matt: Yeah, I feel like we could write pop songs with screaming over it, and people would think it would be heavy because they’re listening to screaming.

What is your best pickup line?

Trevor: I feel like we were just thinking about this.

Matt: “Do you work at Subway?”

Trevor: “Because you just gave me a foot long.” That’s like a classic one.

Trevor: I just like going straight in for it.

Mr. Wentworth: Don’t put that on the video, please. You have something to live up to.

Matt: Yeah, I don’t know. We don’t need pickup lines, how about that?

Trevor: That’s the pickup line. We don’t need to say anything.

Matt: Yeah, we pull the Ryan Gosling. We don’t say anything.

Trevor: Yeah, we don’t even talk. We just look at them until they feel so awkward they start making out with us.

Trevor: If you haven’t heard our new EP, Oak Island, please do so. And subscribe to our YouTube channel, youtube.com/ourlastnightband.

Matt: And we love you, thank you.